Dispatches From a "Post-Racial" America: The Perfect Start to 2015 Edition

Racism didn't waste any time getting started this year in America, kicking us off in 2015 even as clocks were striking the midnight hour across the country. This edition of "Dispatches From a "Post-Racial" America" brings you some of the highlights: 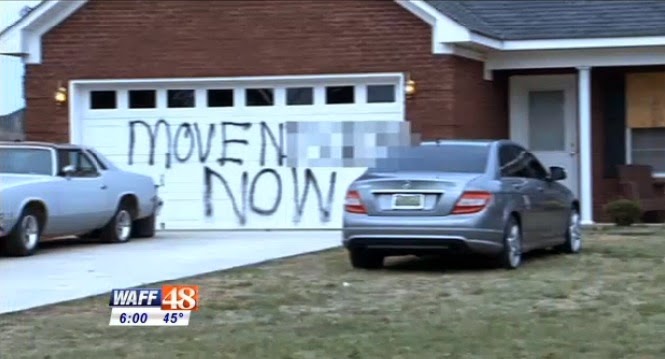 Limestone County, Ala. grandmother Terry Turner was celebrating the New Year with her granddaughter. Someone in the neighborhood decided to toast her by throwing rocks thru her window and spray painting "Move N--ger Now" on her garage door.


And Turner, who has lived in the neighborhood for eight years, told WHNT-19 that over the years she has been subjected to other acts of racial intimidation, including having racial slurs yelled at her when she was in her yard.
The incident illustrates why historical films like the currently-screening Selma (as in Selma, Ala.) that depict such racial terrorism against African-Americans will always be relevant in America.

Read more about the incident here.

The town of Harrison, Ark. (Pop. 13, 163) would like you to know that their racial terrorist past - including the race riots of 1905 and 1909 that were designed to drive all of the African-Americans out of the town - remains in the past.

In fact, the Ku Klux Klan there swears that the town is so "post-racial" that it was perfectly appropriate to erect a Billboard at the beginning of 2015 letting white residents know that it is okay to 'heart' white people, and provided a covert link to KKKradio.com under the guise of WhitePrideRadio.com (check it out for yourself, if you don't believe me).
Something tells me that 'hearting' white people is not that difficult in Harrison - considering the town is only 0.5 % Black, while being 93% White.
Perhaps Harrison could pull its population diversity numbers up by getting out of the billboard business. In November of 2014, two other racist billboards that linked to white supremacists websites were finally brought down. They read: "Anti-Racist is Code Word for Anti-White" and "Welcome to Harrison. Beautiful town. Beautiful people. No wrong exits. No bad neighborhood."

Read more about the billboard here. Pittsburgh, Pa. Police Chief Cameron McLay decided he wanted to promote being part of the solution to racism when he agreed to be photographed holding a sign at the city's New Year's Eve parade that read: "I resolve to challenge racism @ work. #endwhitesilence."
That laudable act resulted in public chastisement from the police union and others. It also resulted in the laughable need for McLay to apologize for offending anyone by the anti-racism sign at a time when the country is in a mass uprising over police racism and brutality toward African-Americans.
To his credit, McLay stuck to his convictions and refused to apologize for the message the sign advocated, emphasizing in a written message that race plays a significant role in how minorities are policed and vowed to continue to address the issue through further officer training.

Read more about the story here.

So, in some way, we start 2015 with some hope.
Though we already know that the battle is far from over and we'll be right back here soon with more "Dispatches From a "Post-Racial" America."
Posted by T.M. Bonner at 7:24 AM