The Michael Brown Shooting: Why the Requirement for ‘Perfect’ Injustice Victims is About Race

By the time Norma L. McCorvey was 21, she had abused drugs and was on her third child. While carrying that third child, her scheme to falsely claim she was raped in order to obtain a legal abortion put her in the path of attorneys seeking to challenge U.S. abortion laws. Those attorneys who would make her (as “Jane Roe”) the lead plaintiff in a landmark 1973 U.S. Supreme Court case that would make abortion within the first three months of pregnancy legal for all women in America and halt the deadly practice of amateur, underground abortions: Roe v. Wade. Subsequently, McCorvey, despite her background, became a national symbol of women’s rights and the fight against female oppression.
Was McCorvey an angel? No. Was McCorvey free from teenage and young adulthood missteps? No. Was her right as a woman to make decisions about her own body worthy of justice and defense –regardless of her sketchy background story? Yes.
Enter Michael Brown, 18, of Ferguson, MO (2014).
An unarmed Brown was shot and killed by police officer Darren Wilson on August 9, 2014 in Ferguson.  Community uproar and demand for accountability, justice and legal recourse for police brutality followed the shooting. Then on the day Ferguson police officials released Wilson’s name to the media, they also released a video allegedly showing Brown stealing cigarillos from a convenience store right before his shooting. Several days later, it was ‘leaked’ that an autopsy revealed Brown had marijuana in his system on the day he was killed.
The message being sent from the video and marijuana leak was clear: Brown wasn’t an angel. Therefore, because there were no wings found on his dead body, the legitimacy of the community and others fighting for his rights and seeking justice against police brutality should be questioned.
Those looking to understand why McCorvey’s backstory did not alter public and court perception about the need for justice in her case while the exact opposite plays out in the Brown case need only know this: McCorvey is white. Brown was African-American.
Sure, a situation in both the lives of McCorvey and Brown intersected with a long-standing discriminatory American policy/law, thus garnering demands for change. The difference is that in America, there is an expectation steeped in racism that African-American victims of injustice and/or those African-Americans fighting for justice should be beyond reproach, while white victims or justice fighters can be ‘flawed’ or ‘complex.’
Just look at the African-American symbols of injustice in some of the most significant U.S. Supreme Court cases and justice movements in history: James Meredith, who integrated the University of Mississippi; Rosa Parks, who brought national attention to Jim Crow laws on public transportation; little pigtailed Ruby Bridges, 6, who stoically endured racists and violence while integrating a white Southern school; and Mildred Loving, the other half of the couple in Loving v. Virginia that struck down laws against interracial marriage. These people were so squeaky clean that if they were a floor, you could eat off of them.
Meanwhile, America is quite comfortable with its white heroes, leaders, and activists being flawed. What does it matter that Thomas Jefferson had essentially a second family with his slave Sally Hemings while President of the United States? Why should politician David Dukes let a little fact that he was a former Grand Wizard of the Ku Klux Klan stop him from being voted in by the American people as a Louisiana State Representative? And who can forget the Oscar-winning performance by Julia Roberts of Real-life Environmental Activist Erin Brockovich. As the film portrays, Brockovich, a struggling single mother, was able to expose corporate environmental crime after being hired by a boss who, when first meeting her, was able to overlook her dressed with certain upper body parts hanging out to see her ‘passion’ and ‘potential.’
As the Brown case illustrates, even teenagers are not spared from this ridiculous double-standard. For teenagers doing teenager stuff resonates quite differently when that teen is African-American. I can speak from past professional experience working in a treatment center serving white, rich kids, that marijuana use is not exclusive to African-American teenagers. Many of those kids had lied and stolen to support their drug habits. Some have been violent right before my eyes toward their parents seeking help for them. But with these teens – as with the infamous “affluenza” teen, Ethan Crouch, who killed four people while driving drunk and was sentenced to not-so-hard time in a treatment center – we are supposed to understand that not being fully mature, teenagers need our support, understanding, and second chances because they have – “potential.”
By contrast, the news that Brown may have had marijuana in his system, whether true or not, has been used to illustrate his being unworthy, a “thug” (aka, N-word), not deserving of empathy, but very deserving of being shot at least six times (twice in the head) by Wilson. One need only read Twitter feeds, listen to commentators on television news programs, or read the comment section of virtually any newspaper covering the story to see examples of this thinking. 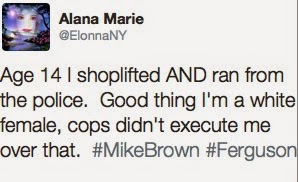 Then the video of the alleged cigarillo ‘robbery’ was released, and the judgment was swift and decisive. “HP” wrote in the New York Times comment section that the video has convinced her “that incident is no longer between a Gentle Giant and rogue cop. It is between a felon and a cop.” And then in the same comment section, “David” of Chicago reminds us that Brown could reasonably have been expected to act aggressively toward Office Wilson because “as any psychologist will tell you, past behavior predicts future behavior.”
So, Brown, whom authorities have verified did not have a criminal record, is now labeled permanently in death as a “felon.” But, of course, that’s a fair assessment because, as “David” points out, what was done in your past is always what you will do in the future.
But, again, such reasoning only applies to African-American victims.
When then 20-year-old Caroline Giuliani, daughter of former New York City Mayor Rudy Giuliani, was arrested in 2010 for shoplifting at a Sephora in Manhattan, the worst she was called was “rebellious” (New York Post). The New York Daily News even went so far as to try to milk sympathy for her plight by calling her a “Poor Little Rich Girl,” while even interviewing a psychologist on what could motivate someone like her to steal. They even included a photo of her as a cute little girl to further drive home the point of her innate innocence to readers. Absent were the references to predictions of “future behavior” of the then Harvard student –– flawed, but worthy of a chance at a bright future. And unless my ears and eyes are failing me, I missed that psychological assessment in media accounts of Brown’s alleged cigarillo swipe.
The double-standard extends to those who are fighting against injustice, as well. Lest we forget, the Occupy Wall Street Movement took over – let me repeat – took over a park in downtown Manhattan for months, met police efforts to shut them down with righteous resistance. They disrupted as they raised awareness about economic inequality between the 99% and the One Percent. Yes, people were tear-gassed. Yes, people were arrested. Yes it was mayhem. Yes it was chaos. Yes it was an uprising watched worldwide. These people meant business. Now, there was some public and media resentment toward the movement, including Newt Gingrich famously telling the large hipster contingent of the movement to “go get a job right after you take a bath.” But unless my ears are failing me, I don’t recall these activists being referred to as “animals” deserving of being murdered by the police, despite whatever flaws critics thought Occupy protestors possessed.
But “animal” has actually been mild compared to other things said about African-American protestors in Ferguson. Some Americans have consistently questioned the protestors’ right to speak out about injustice toward the black community by whites because of “black on black crime,” looting,” and other irrelevant topics. In other words, how can a race of people, whose issues and actions are ‘complex’ and not perfect like their grandmother’s sweet potato pie, think they have the right to demand justice against police killing unarmed black men and women? That’s like saying white Americans should just sit back and accept the murders of loved ones at the hands of serial killers because the vast majority of serial killers are white males.
But, then, again, one can’t really expect a logical assessment of Ferguson protestors from people who view them as racially inferior people whose lives are not worth much at all. “If looting and firebombing, destruction of property and violence is their reaction to everything, perhaps we haven’t shot enough?” asked “Kevin,” of Kansas, on a New York Times comment section, without any shame. 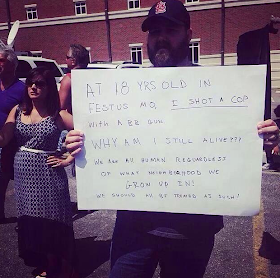 But not every white person in America is drinking that Kool-Aid. Some get the double standards in both word and deed. One poignant Ferguson protestor sign carried by a white male captured on Twitter read: “At 18 Yrs old in Festus, MO, I shot a cop with a BB Gun. Why am I still alive?”
People who are looking for perfection from fighters for justice are living in an alternate reality. For as history has shown, those who are willing to risk it all to right a wrong or correct injustice are not usually those who have the most to lose in the way of big and shiny things like cars, houses, boats, and the corner office. It is usually those with nothing left to lose, nowhere to go but up.  And life at the bottom ain’t no crystal stair. Therefore, the people at the bottom will not be perfect. They may look the brother in the now famous Ferguson protest photo, who slings a fiery object back at police with one hand while holding a bag of potato chips in the other. But they will be courageous.
Author James Baldwin, himself a participant in the black Civil Rights’ Movement of the 60s, understood this formidable combination when he said: “the most dangerous creation in any society is the man who has nothing left to lose.” 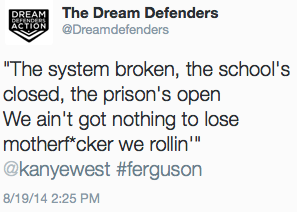 But don’t’ be misled that this powerful fact is lost on those participating in the smear campaigns of Michael Brown, Eric Garner before him, Renisha McBride before him, Jordan Davis before her, and Trayvon Martin before him.
Their goal in focusing on the imperfections of victims and protestors is to silence minority concerns through de-legitimization. Their goal is to create a smoke screen to blind others to the obvious injustices. Their goal is to steer the discourse off-topic in hopes that it will remain there and never find its way back.
It’s an old tactic. It’s a pretty transparent tactic. But people still accept it in America.
The reason is as clear as black and white.

T.M. Bonner is a writer, filmmaker, MBA, Social Justice Advocate, and is also a professional in Social Policy/Social Service in New York City.